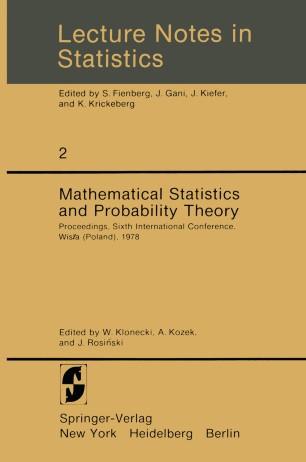 Since 1972 the Institute of Mathematics and the Committee of Mathematics of the Polish Academy of Sciences organize annually con­ ferences on mathematical statistics in Wisla. The 1978 conference, supported also by the University of Wroclaw,was held in Wisla from December 7 to December 13 and attended by around 100 participants from 11 countries. K. Urbanik, Rector of the University of Wroclaw, was the honorary chairman of the conference. Traditionally at these conferences there are presented results on mathematical statistics and related fields obtained in Poland during the year of the conference as well as results presented by invited scholars from other countries. In 1978 invitations to present talks were accepted by 20 e~inent statisticians and probabilists. The topics of the invited lectures and contributed papers included theoretical statistics with a broad cover of the theory of linear models, inferences from stochastic processes, probability theory and applications to biology and medicine. In these notes there appear papers submitted by 30 participants of the conference. During the conference, on December 9, there was held a special session of the Polish Mathematical Society on the occasion of elect­ ing Professor Jerzy Neyman the honorary member of the Polish Mathematical Society. At this session W. Orlicz, president of the Polish Mathematical Society, K.Krickeberg,president of the Bernoulli Society. R. Bartoszynski and K. Doksum gave talks on Neyman IS con­ tribution to statistics, his organizational achievements in the U.S.