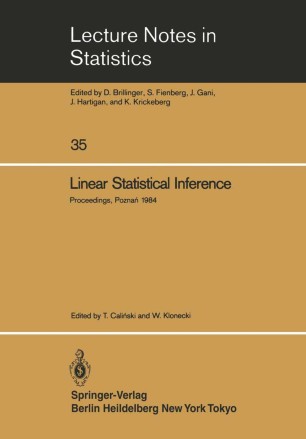 Proceedings of the International Conference held at Poznań, Poland, June 4–8, 1984

An International Statistical Conference on Linear Inference was held in Poznan, Poland, on June 4-8, 1984. The conference was organized under the auspices of the Polish Section of the Bernoulli Society, the Committee of Mathematical Sciences and the Mathematical Institute of the ,Polish Academy of Sciences. The purpose of the meeting was to bring together scientists from vari­ ous countries working in the diverse areas of statistical sciences but showing great interest in the advances of research on linear inference taken in its broad sense. Thus, the conference programme included ses­ sions on Gauss-Markov models, robustness, variance components~ experi­ mental design, multiple comparisons, multivariate models, computational aspects and on some special topics. 38 papers were read within the vari­ ous sessions and 5 were presented as posters. At the end of the confer­ ence a lively general discussion session was held. The conference gathered more than ninety participants from 16 countries, representing both parts of Europe, North America and Asia. Judging from opinions expressed by many participants, the conference was quite suc­ cessful, well contributing to the dissemination of knowledge and the stimulation of research in different areas linked with statistical li­ near inference. If the conference was really a success, it was due to all its participants who in various ways were devoting their time and efforts to make the conference fruitful and enjoyable.