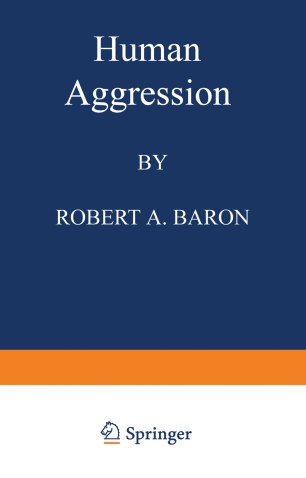 Part of the Perspectives in Social Psychology book series (PSPS)

also many newer lines of research, to which I will return below, are represented in various chapters. And finally, I have included a sepa­ rate unit on methods for the study of aggression-a feature that I believe to be unique to the present volume. In these ways, I have at­ tempted to produce a text that is as broad and eclectic in coverage as I could make it. While the present volume grew, in part, out of my desire to pro­ duce what I thought might prove to be a useful teaching aid, it also developed out of a second major motive. During the past few years, a large number of new-and to me, exciting-lines of investigation have emerged in rapid order. These have been extremely varied in scope, including, among many others, such diverse topics as the effects of sexual arousal upon aggression, the impact of environmental factors (e. g. , heat, noise, crowding) upon such behavior, interracial aggres­ sion, and the influence of heightened self-awareness. Despite the fact that such topics have already generated a considerable amount of re­ search, they were not, to my knowledge, adequately represented irt any existing volume. Given this state of affairs, it seemed to me that a reasonably comprehensive summary of this newer work might prove both useful and timely.