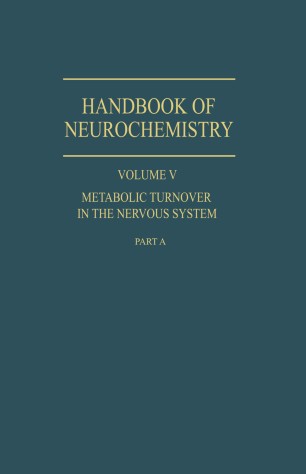 Metabolic Turnover in the Nervous System

Volume V deals with the problems of turnover in the nervous system. "Turnover" is defined in different ways, and the term is used in different contexts. It is used rather broadly in the present volume, and intentionally so. The turnover of macromolecules is only one aspect; here "turnover" in­ dicates the simultaneous and coordinated formation and breakdown of macromolecular species. The complexities of cerebral protein turnover are shown in a separate chapter dealing with the synthesis of proteins, in another on breakdown, and in still another on the relationship of these two (showing how the two halves of turnover are controlled). The fact that most likely the two halves of protein turnover, synthesis and breakdown, are separated spatially and the mechanisms involved are different further emphasizes the complexity of macromolecular turnover. "Turnover" is used in a different context when the turnover of a cycle is discussed; but here again a number of complex metabolic reactions have to be interrelated and controlled; some such cycles are discussed briefly in this volume, additional cycles have been discussed with metabolism, and some cycles still await elucidation or discovery.