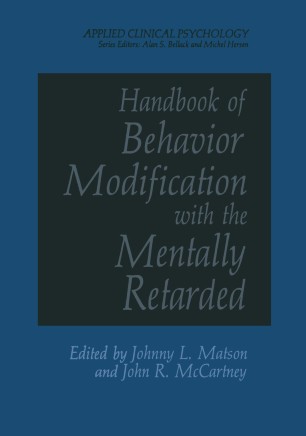 Handbook of Behavior Modification with the Mentally Retarded

Mental retardation has probably existed for as long as mankind has inhabited the earth. References to seemingly retarded persons appear in Greek and Roman literature. Examination of Egyptian mummies suggests that some may have suffered from diseases associated with mental retardation. Mohammed advocated feeding and housing those without reason. There is other evidence for favorable attitudes toward the retarded in early history, but attitudes var­ ied from age to age and from country to country. The concept of remediation did not emerge until the nineteenth century. Earlier, in 1798, ltard published an account of his attempt to train the "wild boy of Aveyron." A rash of efforts to habilitate retarded persons followed. Training schools were developed in Europe and the United States in the 1800s; however, these early schools did not fulfill their promise, and by the end of the nineteenth century large, inhumane warehouses for retarded persons existed. The notion of habilitation through training had largely been abandoned and was not to reappear until after World War II.