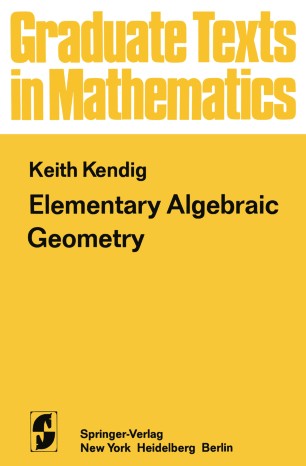 This book was written to make learning introductory algebraic geometry as easy as possible. It is designed for the general first- and second-year graduate student, as well as for the nonspecialist; the only prerequisites are a one-year course in algebra and a little complex analysis. There are many examples and pictures in the book. One's sense of intuition is largely built up from exposure to concrete examples, and intuition in algebraic geometry is no exception. I have also tried to avoid too much generalization. If one under­ stands the core of an idea in a concrete setting, later generalizations become much more meaningful. There are exercises at the end of most sections so that the reader can test his understanding of the material. Some are routine, others are more challenging. Occasionally, easily established results used in the text have been made into exercises. And from time to time, proofs of topics not covered in the text are sketched and the reader is asked to fill in the details. Chapter I is of an introductory nature. Some of the geometry of a few specific algebraic curves is worked out, using a tactical approach that might naturally be tried by one not familiar with the general methods intro­ duced later in the book. Further examples in this chapter suggest other basic properties of curves. In Chapter II, we look at curves more rigorously and carefully.