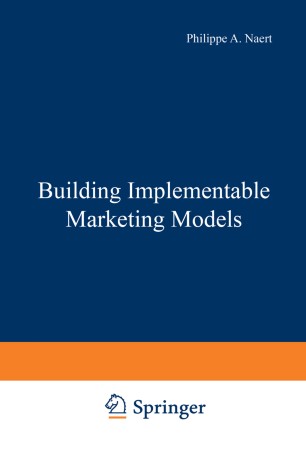 The observation that many models are built but few are used has almost become a commonplace in the management science and operations research literature. Nevertheless, the statement remains to a large extent true today, also and perhaps even more so where marketing models are concerned. This led Philippe Naert, now about four years ago, to write a concept text of a few hundred pages on the subject of how to build imple­ men table marketing models, that is, models that can and will be used. One of the readers of that early manuscript was Peter Leefiang. He made suggestions leading to a more consistent ordering of the material and pro­ posed the addition of some topics and the expansion of others to make the book more self-contained. This resulted in a co-authorship and a revised version, which was written by Peter Leefiang and consisted of a reshuffling and an expansion of the original material by about fifty per cent. Several meetings between the co-authors produced further refinements in the text and the sequence of chapters and sections, after which Philippe Naert again totally reworked the whole text. This led to a new expansion, again by fifty per cent, of the second iteration. The third iteration also required the inclusion of a great deal of new literature indicating that the field is making fast progress and that implementation has become a major concern to marketing model builders.