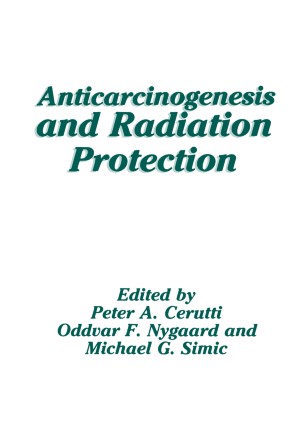 This book is based on the invited and contributed papers presented at the 2nd International Conference on Anticarcinogenesis and Radiation Protection held at the National Bureau of Standards, Gaithersburg, Maryland, USA, on March 8-12, 1987. The conference documented developments that have taken place in areas that were addressed during the first conference in 1982. A number of new topics, such as biological response modifiers, were included because of their emerging relevance to anticarcinogenesis and radiation protection. The organization of the material in this book does not follow the conference program; rather, we have attempted to provide a different sequence for didactic reasons. The aim of the conference, which is reflected in this book, was to promote further development of mechanistic approaches to cancer prevention and treatment based on recent progress in molecular biology and free radical chemistry. At the basis of carcinogenesis lie changes in the dynamics of growth and differentiation of specific cell subpopulations in the target tissue. 'These changes are brought about by selective toxicity and modulation of gene expression that are induced by xenobiotic carcinogens and affected by physiological and genetic factors. The book deals with oxidative stress and molecular damage caused by radiation and chemical pro-oxidants and their role in carcinogenesis, and it discusses mechanisms of deregulation of the expression of oncogenes and other genes involved in carcinogenic initiation and promotion.