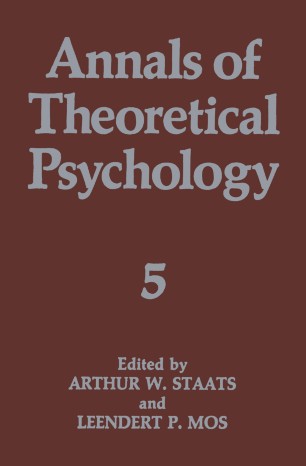 I have been involved in constructing a unified theory for many years, in considering the state of psychology's unity-disunity, and in generally attempt­ ing to persuade our profession to work on its unification. In this work I have had the opportunity to become acquainted with the works of a number of other psychologists whose statements indicated that they had something to say on these topics. I saw also that it would be very productive for psychology to have these individuals address themselves to psychology's disunity-unity, consid­ ered as a problem that should be confronted and addressed. In 1983 I began to indicate that it was my intention to devote a book to the topic, as seen through the eyes of a group of prominent psychologists concerned with related issues. It was very fortunate from my standpoint that Joseph Royce and later Leendert Mos, who were editing this series, were interested in this book. I accepted the former's invitation to do within the present series the book I had planned. Although I must assume responsibility for selection of the contributors, for the book's organization, and for the first editing of their papers for substance, Pro­ fessor Mos offered to help in an editorial capacity and I am most grateful for his contributions to the formal editing. The volume is much improved as a result of his careful efforts, which in one case involved rewriting material.