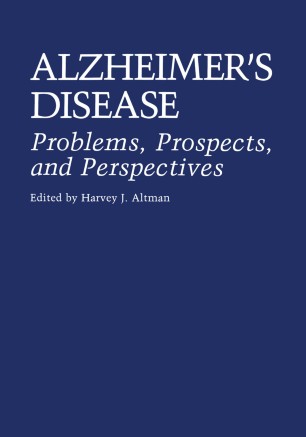 Alzheimer's disease is a primary neurodegenerative disease whose incidence and prevalence is rapidly approaching epidemic proportions. A major reason for this is that man is living longer than he has ever lived before and the likelihood of contracting the disease is significantly greater within the elderly portion of the population. The problem becomes even more acute in the light of recent estimates which predict that the number of people living beyond the age of 65 is expected to continue to increase. The impact of these statistics on the family and the health care industry in terms of time, effort and cost are staggering. A recent report issued by the Michigan Task Force on Alzheimer's Disease and Related Conditions (1987) effectively underscores this last point. "Each person with a dementing disease requires an average of seven years of care, either at home or in a residential care facility. Care provided at home is estimated to cost about $12,000 annually, for a total of $84,000 per person. This is a conservative figure, however, because many persons with dementia spend their last few years in a nursing home at an average 'cost of $22,000 per year, and some spend from 10 to 15 years in a nursing home, for a total cost of $220,000 to $330,000.