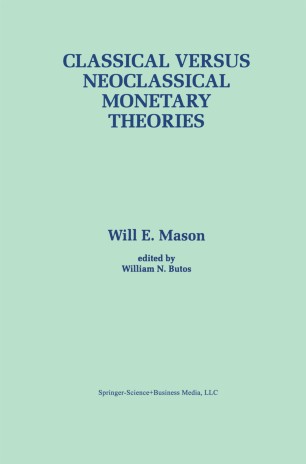 The Roots, Ruts, and Resilience of Monetarism — and Keynesianism

Classical Versus Neoclassical Monetary Theories, completed just before Professor Will E. Mason's untimely death, places recent and mid-20th century monetary theory in a larger historical context, while examining the relevance of contemporary questions in monetary policy. The first half of the volume analyzes the development of the methodological and conceptual foundations of monetary theory, up to and including contemporary mainstream views; the second half addresses more policy-oriented monetary questions. Emphasis is placed on the dichotomy of monetary and value theory, the Walrasian general equilibrium paradigm, the resolution of the `Patinkin controversy', the Federal Reserve System's failed experiment with `pure monetarism', and the misplacement of the free market in the `Chicago paradox'.
Classical Versus Neoclassical Monetary Theories will be of interest both to historians of economic thought and monetary and macro economists, as well as to many well-informed followers and fashioners of monetary policy.