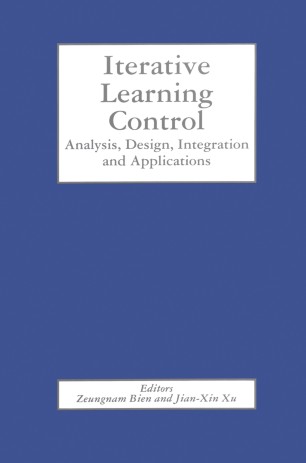 Iterative Learning Control (ILC) differs from most existing control methods in the sense that, it exploits every possibility to incorporate past control informa­ tion, such as tracking errors and control input signals, into the construction of the present control action. There are two phases in Iterative Learning Control: first the long term memory components are used to store past control infor­ mation, then the stored control information is fused in a certain manner so as to ensure that the system meets control specifications such as convergence, robustness, etc. It is worth pointing out that, those control specifications may not be easily satisfied by other control methods as they require more prior knowledge of the process in the stage of the controller design. ILC requires much less information of the system variations to yield the desired dynamic be­ haviors. Due to its simplicity and effectiveness, ILC has received considerable attention and applications in many areas for the past one and half decades. Most contributions have been focused on developing new ILC algorithms with property analysis. Since 1992, the research in ILC has progressed by leaps and bounds. On one hand, substantial work has been conducted and reported in the core area of developing and analyzing new ILC algorithms. On the other hand, researchers have realized that integration of ILC with other control techniques may give rise to better controllers that exhibit desired performance which is impossible by any individual approach.