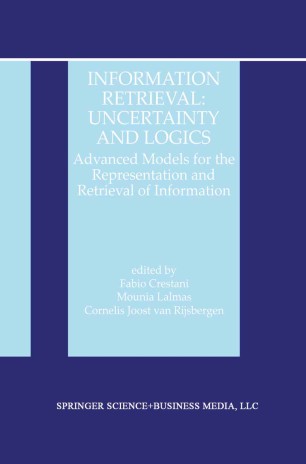 Advanced Models for the Representation and Retrieval of Information

In recent years, there have been several attempts to define a logic for information retrieval (IR). The aim was to provide a rich and uniform representation of information and its semantics with the goal of improving retrieval effectiveness. The basis of a logical model for IR is the assumption that queries and documents can be represented effectively by logical formulae. To retrieve a document, an IR system has to infer the formula representing the query from the formula representing the document. This logical interpretation of query and document emphasizes that relevance in IR is an inference process.
The use of logic to build IR models enables one to obtain models that are more general than earlier well-known IR models. Indeed, some logical models are able to represent within a uniform framework various features of IR systems such as hypermedia links, multimedia data, and user's knowledge. Logic also provides a common approach to the integration of IR systems with logical database systems. Finally, logic makes it possible to reason about an IR model and its properties. This latter possibility is becoming increasingly more important since conventional evaluation methods, although good indicators of the effectiveness of IR systems, often give results which cannot be predicted, or for that matter satisfactorily explained.
However, logic by itself cannot fully model IR. The success or the failure of the inference of the query formula from the document formula is not enough to model relevance in IR. It is necessary to take into account the uncertainty inherent in such an inference process. In 1986, Van Rijsbergen proposed the uncertainty logical principle to model relevance as an uncertain inference process. When proposing the principle, Van Rijsbergen was not specific about which logic and which uncertainty theory to use. As a consequence, various logics and uncertainty theories have been proposed and investigated. The choice of an appropriate logic and uncertainty mechanism has been a main research theme in logical IR modeling leading to a number of logical IR models over the years.
Information Retrieval: Uncertainty and Logics contains a collection of exciting papers proposing, developing and implementing logical IR models. This book is appropriate for use as a text for a graduate-level course on Information Retrieval or Database Systems, and as a reference for researchers and practitioners in industry.