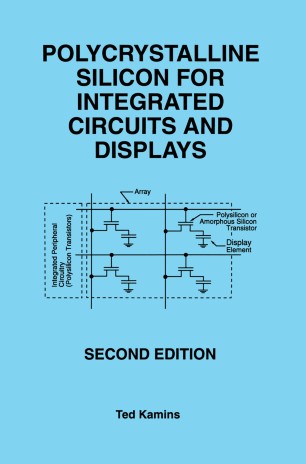 Polycrystalline Silicon for Integrated Circuits and Displays, Second Edition presents much of the available knowledge about polysilicon. It represents an effort to interrelate the deposition, properties, and applications of polysilicon. By properly understanding the properties of polycrystalline silicon and their relation to the deposition conditions, polysilicon can be designed to ensure optimum device and integrated-circuit performance.
Polycrystalline silicon has played an important role in integrated-circuit technology for two decades. It was first used in self-aligned, silicon-gate, MOS ICs to reduce capacitance and improve circuit speed. In addition to this dominant use, polysilicon is now also included in virtually all modern bipolar ICs, where it improves the basic physics of device operation. The compatibility of polycrystalline silicon with subsequent high-temperature processing allows its efficient integration into advanced IC processes. This compatibility also permits polysilicon to be used early in the fabrication process for trench isolation and dynamic random-access-memory (DRAM) storage capacitors.
In addition to its integrated-circuit applications, polysilicon is becoming vital as the active layer in the channel of thin-film transistors in place of amorphous silicon. When polysilicon thin-film transistors are used in advanced active-matrix displays, the peripheral circuitry can be integrated into the same substrate as the pixel transistors. Recently, polysilicon has been used in the emerging field of microelectromechanical systems (MEMS), especially for microsensors and microactuators. In these devices, the mechanical properties, especially the stress in the polysilicon film, are critical to successful device fabrication.
Polycrystalline Silicon for Integrated Circuits and Displays, Second Edition is an invaluable reference for professionals and technicians working with polycrystalline silicon in the integrated circuit and display industries.