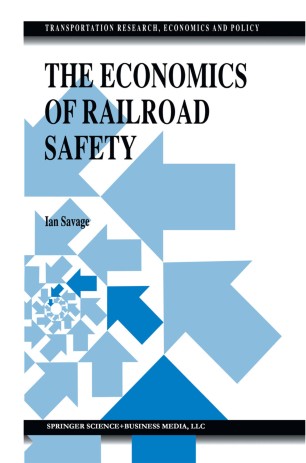 The Economics of Railroad Safety

The American public has a fascination with railroad wrecks that goes back a long way. One hundred years ago, staged railroad accidents were popular events. At the Iowa State fair in 1896, 89,000 people paid $20 each, at current prices, to see two trains, throttles wide open, collide with each other. "Head-on Joe" Connolly made a business out of "cornfield meets" holding seventy-three events in thirty-six years. Picture books of train wrecks do good business presumably because a train wreck can guarantee a spectacular destruction of property without the messy loss of life associated with aircraft accidents. A "train wreck" has also entered the popular vocabulary in a most unusual way. When political manoeuvering leads to failure to pass the federal budget, and a shutdown is likely of government services, this is widely called a "train wreck. " In business and team sports, bumbling and lack of coordination leading to a spectacular and public failure to perform is also called "causing a train wreck. " A person or organization who is disorganized may be labelled a "train wreck. " It is therefore not surprising that the public perception of the safety of railroads centers on images of twisted metal and burning tank cars, and a general feeling that these events occur quite often. After a series of railroad accidents, such as occurred in the winter of 1996 or the summer of 1997, there are inevitable calls that government "should do something.