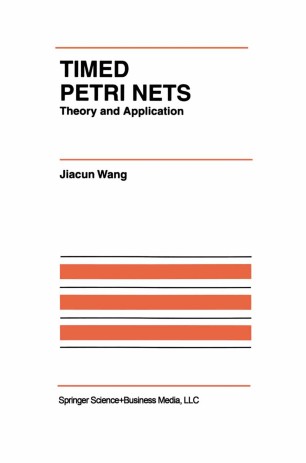 Driven by the request for increased productivity, flexibility, and competitiveness, modern civilization increasingly has created high-performance discrete event dynamic systems (DEDSs). These systems exhibit concurrent, sequential, competitive activities among their components. They are often complex and large in scale, and necessarily flexible and thus highly capital-intensive. Examples of systems are manufacturing systems, communication networks, traffic and logistic systems, and military command and control systems. Modeling and performance evaluation play a vital role in the design and operation of such high-performance DEDSs and thus have received widespread attention from researchers over the past two decades. One methodology resulting from this effort is based on timed Petri nets and related graphical and mathematical tools.
The popularity that Petri nets have been gaining in modeling of DEDSs is due to their powerful representational ability of concurrency and synchronization; however these properties of DEDSs cannot be expressed easily in traditional formalisms developed for analysis of `classical' systems with sequential behaviors.
This book introduces the theories and applications of timed Petri nets systematically. Moreover, it also presents many practical applications in addition to theoretical developments, together with the latest research results and industrial applications of timed Petri nets.
Timed Petri Nets: Theory and Application is intended for use by researchers and practitioners in the area of Discrete Event Dynamic Systems.