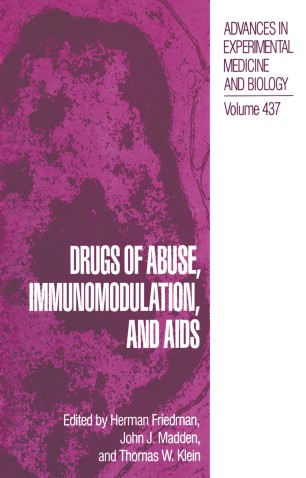 Drugs of Abuse, Immunomodulation, and Aids

Part of the Advances in Experimental Medicine and Biology book series (AEMB, volume 437)

Introduction and Perspectives This volume represents the Proceedings of the Fifth Annual Symposium on Drugs of Abuse, Immunomodulation, and AIDS. The meeting was held in Nashville, Tennessee, June 12-14, 1997. In this symposium, as in the past, newer knowledge was reviewed concerning the relationship between the immune and the nervous systems with regard to the effects of drugs of abuse. This symposium focused on the relationship between the immune system and the nervous system with regard to the effects of drugs of abuse and infections such as the immunodeficiency virus that causes AIDS. As in the past symposia, presentations fo­ cused on the brain-immune axis from the viewpoint of drugs of abuse rather than from the subject of the brain or immunity alone. The aim of this series of conferences has been to clarify the consequences ofimmunomodulation induced by drugs of abuse on susceptibility and pathogenesis of infectious diseases, both in man and in various animal model systems. Recreational use of drugs of abuse, such as morphine, cocaine, and marijuana, as well as alcohol, by large numbers of individuals in this country and around the world has aroused serious concerns about the consequences of use of such drugs, especially on the normal physiological responses of an individual, including immune mechanisms. It is now widely known that many drugs of abuse, including marijuana, are used by millions ofindi­ viduals in this country and by even more abroad.