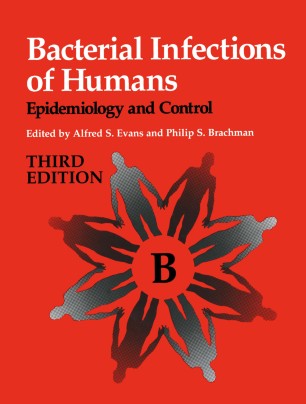 In Memoriam of Alfred S. Evans This third edition of Bacterial Infections of Humans is dedicated to Alfred Spring Evans, who died on January 21, 1996, 2Yz years after a diagnosis of cancer. Al was the senior editor of this textbook, which he founded with Harry Feldman in 1982. Al was a clinician, epidemiologist, educator, catalyst for biomedical research, historian, author, speaker, seeker of the truth, sincere friend of students, sports enthusiast, traveler, and truly a man of all seasons. He was a devoted husband to Brigette Klug Evans, father of three children, and grandfather of four. Al was born in Buffalo, New York, on August 21,1917, to Ellen Spring and John H. Evans, M.D., one ofthe United States's first anesthesiologists and an early researcher in the field of oxygen therapy. He received his undergraduate training at the University of Michigan; was awarded an M.D. degree in 1943 from the University of Buffalo; interned in Pittsburgh, Pennsylvania; and performed his medical residency at the Goldwater Hospital in New York City. He was in the United States Army from 1944 to 1946, assigned as a public health officer to a base in Okinawa, Japan. It was there that he met Drs.