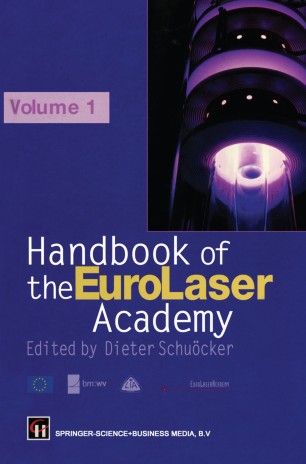 Handbook of the Eurolaser Academy

The European Community regards training as a priority area and has therefore developed a series of programmes in the field of vocational training. This book is the result of a pilot project selected under two of these Community Action Programmes. It was initially selected under the COMETT programme, concerned with the development of continuing vocational training in the European Community. Moreover, it was one of the few selected projects to receive further funding under a second selection in the context of the LEONARDO DA VINCI Action Programme for the implementation of a European Community Vocational Training policy. It is with great pleasure that I present the outcome of this project which embodies one of the fundamental objectives of the LEONARDO DA VINCI Programme -training for new technologies in SMEs, which make a significant contribution to economic development in Europe. K DRAXLER Director Directorate General XXII European Commission x Acknowledgements The Volume Editor gratefully acknowledges funding by the LEONARDO DA VINCI Programme of the Commission of the European Community and by the Austrian Federal Ministry of Science and Transport whose financial support has made the EuroLaser Academy a reality and has led directly to the generation ofthis handbook. He is also indebted to Director Dr. Klaus Draxler, Head of the LEONARDO DA VINCI Programme, DG XXII of the Commission of the European Community, moreover to Director General Raul Kneucker, Minister's Advisor Helmut Schacher and Mrs. Friederike Pranckl-Kloepfer from the Austrian Federal Ministry of Science and Transport.