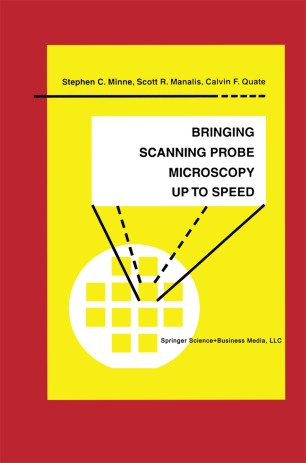 Bringing Scanning Probe Microscopy Up to Speed introduces the principles of scanning probe systems with particular emphasis on techniques for increasing speed. The authors include useful information on the characteristics and limitations of current state-of-the-art machines as well as the properties of the systems that will follow in the future. The basic approach is two-fold. First, fast scanning systems for single probes are treated and, second, systems with multiple probes operating in parallel are presented.
The key components of the SPM are the mechanical microcantilever with integrated tip and the systems used to measure its deflection. In essence, the entire apparatus is devoted to moving the tip over a surface with a well-controlled force. The mechanical response of the actuator that governs the force is of the utmost importance since it determines the scanning speed. The mechanical response relates directly to the size of the actuator; smaller is faster. Traditional scanning probe microscopes rely on piezoelectric tubes of centimeter size to move the probe. In future scanning probe systems, the large actuators will be replaced with cantilevers where the actuators are integrated on the beam. These will be combined in arrays of multiple cantilevers with MEMS as the key technology for the fabrication process.