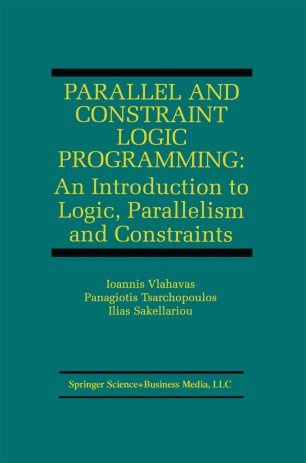 An Introduction to Logic, Parallelism and Constraints

Part of the The Springer International Series in Engineering and Computer Science book series (SECS, volume 875)

Constraint Logic Programming (CLP), an area of extreme research interest in recent years, extends the semantics of Prolog in such a way that the combinatorial explosion, a characteristic of most problems in the field of Artificial Intelligence, can be tackled efficiently. By employing solvers dedicated to each domain instead of the unification algorithm, CLP drastically reduces the search space of the problem, which leads to increased efficiency in the execution of logic programs. CLP offers the possibility of solving complex combinatorial problems in an efficient way, and at the same time maintains the advantages offered by the declarativeness of logic programming.
The aim of this book is to present parallel and constraint logic programming, offering a basic understanding of the two fields to the reader new to the area. The first part of the book gives an introduction to the fundamental aspects of conventional logic programming which is necessary for understanding the parts that follow. The second part includes an introduction to parallel logic programming, architectures and implementations proposed in the area. Finally, the third part presents the principles of constraint logic programming. The last two parts also include descriptions of the supporting facilities for the two paradigms in two popular systems; ECLIPSe and SICStus. These platforms have been selected mainly because they offer both parallel and constraint features. Annotated and explained examples are also included in the relevant parts, offering a valuable guide and a first practical experience to the reader. Finally, applications of the covered paradigms are presented.
The authors felt that a book of this kind should provide some theoretical background necessary for the understanding of the covered logic programming paradigms, and a quick start for the reader interested in writing parallel and constraint logic programming programs. However it is outside the scope of this book to provide a deep theoretical background of the two areas. In that sense, this book is addressed to a public interested in obtaining a knowledge of the domain, without spending the time and effort to understand the extensive theoretical work done in the field &endash; namely postgraduate and advanced undergraduate students in the area of logic programming.
This book fills a gap in the current bibliography, since there is no comprehensive book of this level that covers the areas of conventional, parallel, and constraint logic programming.
Parallel and Constraint Logic Programming: An Introduction to Logic, Parallelism and Constraints is appropriate for an advanced level course on Logic Programming or Constraints, and as a reference for practitioners and researchers in industry.