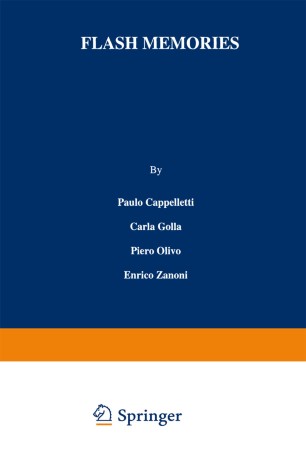 A Flash memory is a Non Volatile Memory (NVM) whose "unit cells" are fabricated in CMOS technology and programmed and erased electrically. In 1971, Frohman-Bentchkowsky developed a folating polysilicon gate tran­ sistor [1, 2], in which hot electrons were injected in the floating gate and removed by either Ultra-Violet (UV) internal photoemission or by Fowler­ Nordheim tunneling. This is the "unit cell" of EPROM (Electrically Pro­ grammable Read Only Memory), which, consisting of a single transistor, can be very densely integrated. EPROM memories are electrically programmed and erased by UV exposure for 20-30 mins. In the late 1970s, there have been many efforts to develop an electrically erasable EPROM, which resulted in EEPROMs (Electrically Erasable Programmable ROMs). EEPROMs use hot electron tunneling for program and Fowler-Nordheim tunneling for erase. The EEPROM cell consists of two transistors and a tunnel oxide, thus it is two or three times the size of an EPROM. Successively, the combination of hot carrier programming and tunnel erase was rediscovered to achieve a single transistor EEPROM, called Flash EEPROM. The first cell based on this concept has been presented in 1979 [3]; the first commercial product, a 256K memory chip, has been presented by Toshiba in 1984 [4]. The market did not take off until this technology was proven to be reliable and manufacturable [5].