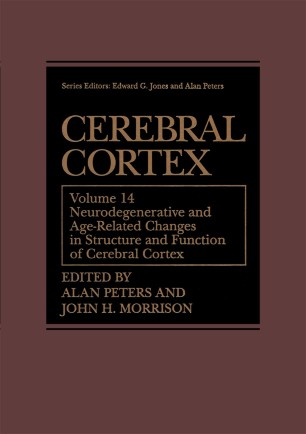 This volume of Cerebral Cortex is dedicated to Sir John Eccles, who was an active member of the advisory board for the series until his death in May 1997. His input as to what topics should be covered in future volumes of this series will be sorely missed. The present volume is concerned with neurodegenerative disorders and age­ related changes in the structure and function of the cerebral cortex, a topic that has attracted increasing interest as longevity and the number of aged individuals in the population increase. Although much of the research on the neurodegenerative effects of aging has been centered on Alzheimer's disease, most of the aging popu­ lation will not be afflicted by this disease. They will, however, be affected by the consequences of normal aging, so the first few chapters of this volume are con­ cerned with that topic. Chapter 1, by Marilyn S. Albert and Mark B. Moss, gives an account of the cognitive changes that accompany normal human aging. Chapter 2, by Mark B.