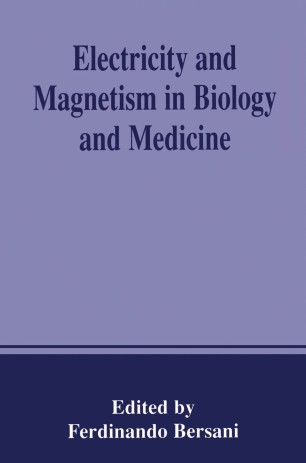 Electricity and Magnetism in Biology and Medicine

In the last few decades the research on bioelectromagnetics has expanded worldwide. About one thousand researchers are now working in the field in a variety of institutions throughout the world, including medical, biological, engineering, and technical laboratories and protection agencies. After many years of research, a clear picture is now emerging: Initially the research was mainly interested in the therapeutic applications of ELF electric and magnetic fields, and the RF range was mainly taken into consideration with respect to thermal effects only. Then, tne growing body of biological effects of ELF fields on cells and biological tissues (particularly for the repair processes in bone) have drawn the attention of researchers to non-thermal effects, ranging from static fields to microwaves. A specific field of interest that has been the object of a large debate in the last twenty years has been the potential health risk associated with electric power production and distribution and, more recently, with domestic and industrial appliances. In the last few years, the explosion of the market for cellularphones has highlighted the issue of possible health dangers related to their use and to the widespread presence of base stations. The first World Congress on Electricity and Magnetism in Biology and Medicine, was held in Orlando, Florida, in 1992, and collected the widest amount of contributi9ns from almost all the major researchers involved in the field.