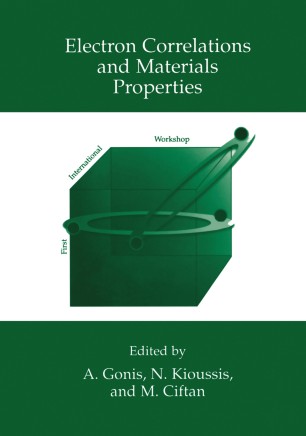 Over the last thirty years or so, the attempts to identify the electronic origins of materials properties have proceeded along two distinct and apparently divergent methodologies. On the one-hand, so-called single-particle methods are based on the study of a single electron moving in an effective field formed by the other electrons and the nuclei in the system. Band theory, as this approach is referred to, has had impressive successes in determining the equilibrium properties, such as structural stability, volume, and charge densities, of specific materials, notably metals. Today, even coherent phase diagrams (based on a single underlying lattice) for binary metallic alloys can be studied with considerable accuracy. In spite of its serious and well-understood limitations regarding the handling of correlations, band theory has been embraced by the materials scientist. Its single-particle nature endows the method with an economy of concepts which leads to a clear identification of mechanisms driving physical behavior at the electronic level. This perceived clarity often tends to override legitimate concerns regarding the validity of the method or its ability to correctly identify the mechanisms in the first place. The alternative methodology pursued in the study of quantum systems consists of what can be referred to as conventional many-body theory. This methodology is based on attempts to study explicitly the effects of interparticle correlations using a number of different formal approaches, including but not limited to, perturbation methods, Green-function equation of motion methods, configuration interactions, quantum Monte Carlo, and others.