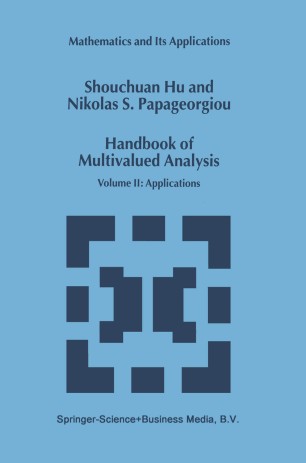 Part of the Mathematics and Its Applications book series (MAIA, volume 500)

In volume I we developed the tools of "Multivalued Analysis. " In this volume we examine the applications. After all, the initial impetus for the development of the theory of set-valued functions came from its applications in areas such as control theory and mathematical economics. In fact, the needs of control theory, in particular the study of systems with a priori feedback, led to the systematic investigation of differential equations with a multi valued vector field (differential inclusions). For this reason, we start this volume with three chapters devoted to set-valued differential equations. However, in contrast to the existing books on the subject (i. e. J. -P. Aubin - A. Cellina: "Differential Inclusions," Springer-Verlag, 1983, and Deimling: "Multivalued Differential Equations," W. De Gruyter, 1992), here we focus on "Evolution Inclusions," which are evolution equations with multi­ valued terms. Evolution equations were raised to prominence with the development of the linear semigroup theory by Hille and Yosida initially, with subsequent im­ portant contributions by Kato, Phillips and Lions. This theory allowed a successful unified treatment of some apparently different classes of nonstationary linear par­ tial differential equations and linear functional equations. The needs of dealing with applied problems and the natural tendency to extend the linear theory to the nonlinear case led to the development of the nonlinear semigroup theory, which became a very effective tool in the analysis of broad classes of nonlinear evolution equations.