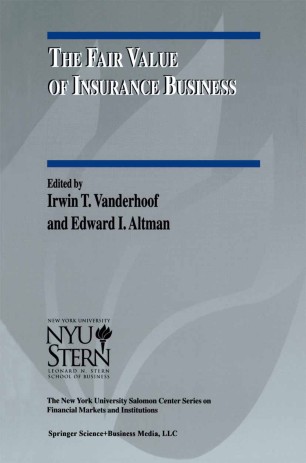 The Fair Value of Insurance Business

Insurance companies, as well as banks and thrift institutions, have traditionally reported assets and liabilities on the basis of their amortized cost, or book value. But following the turmoil in securities markets due to highly volatile interest rate fluctuations in the 1980s and the early 1990s, and problems caused by inadequate liquidity, in the mid-1990s the Financial Accounting Standards Board (FASB) issued a new ruling calling for financial intermediaries to report the fair, or market, value of most assets. Called FAS 115, this new standard is the first step in the eventual change to valuing all the assets and liabilities belonging to financial intermediaries under the fair value accounting method. Thus, these changes will pose tremendous future implications for three key business measures of a financial intermediary: Compared to banks and other financial intermediaries, life insurance companies have the longest term and most complex liabilities, and hence the new FASB requirement poses the most severe challenges to the life insurance industry. The lessons learned from the debate among life insurance academics and professionals about how respond to the fair value reporting rule will be instructive to their counterparts in other sectors of the insurance industry, as well as those involved with other financial institutions. Of particular note are the two papers which comprise Part III. The first provides examples of the fair valuing of annuity contracts, while the second offers examples of the fair valuing of term insurance products.
As the papers collected in The Fair Value of Insurance Business extend and update some of the issues treated in a previous Salomon Center conference volume, The Fair Value of Insurance Liabilities, this new volume may be viewed as a companion to the earlier book.