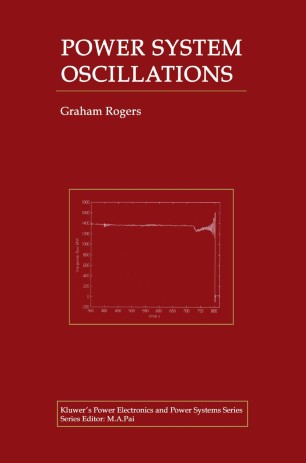 Power System Oscillations deals with the analysis and control of low frequency oscillations in the 0.2-3 Hz range, which are a characteristic of interconnected power systems. Small variations in system load excite the oscillations, which must be damped effectively to maintain secure and stable system operation. No warning is given for the occurrence of growing oscillations caused by oscillatory instability, since a change in the system's operating condition may cause the transition from stable to unstable. If not limited by nonlinearities, unstable oscillations may lead to rapid system collapse. Thus, it is difficult for operators to intervene manually to restore the system's stability. It follows that it is important to analyze a system's oscillatory behavior in order to understand the system's limits. If the limits imposed by oscillatory instability are too low, they may be increased by the installation of special stabilizing controls.
Since the late 60s when this phenomena was first observed in North American systems, intensive research has resulted in design and installation of stabilizing controls known as power system stabilizers (PSS). The design, location and tuning of PSS require special analytical tools. This book addresses these questions in a modal analysis framework, with transient simulation as a measure of controlled system performance. After discussing the nature of the oscillations, the design of the PSS is discussed extensively using modal analysis and frequency response. In the scenario of the restructured power system, the performance of power system damping controls must be insensitive to parameter uncertainties. Power system stabilizers, when well tuned, are shown to be robust using the techniques of modern control theory. The design of damping controls, which operate through electronic power system devices (FACTS), is also discussed. There are many worked examples throughout the text.
The Power System Toolbox© for use with MATLAB® is used to perform all of the analyses used in this book.
The text is based on the author's experience of over 40 years as an engineer in the power industry and as an educator.