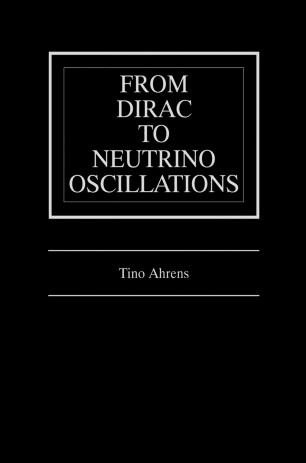 From Dirac to Neutrino Oscillations

1bis text is meant to be a view of the quantum mechanical fonnalism as it develops with the successive introduction of different types oftransfonnations. In particular, it is meant to help the readers with three tasks: acquainting themselves with a general and direct approach to the quantum mechanics of spin­ one-half and spin-one particles, primarily leptons, photons and massive vector bosons, and to some extent quarks; finding out what some of the related areas of current research interest are; and, last and foremost, trying to understand the subject, beginning with and stressing the principles involved. The exposition is based on finite-dimensional representations of the homogeneous Lorentz group, and the subsequent introduction of gauge transformations, of the Abelian and non­ Abelian varieties. Reference to classical mechanics is avoided. Acting on the simple basis spinors and vectors, Lorentz transfonnations generate wave and field functions. Equations are obtained by the relativistic generalization of the addition of angular momenta, the wave or field functions being the solutions. For zero mass the equations may be obtained as the limits of the equations for the massive cases or by the application of the Euclidian group in two dimensions. The latter approach is illuminating in that it uncovers a loss in generality resulting from the former. Identifying momenta as eigenvalues of translations demonstrates covariance under the inhomogeneous Lorentz or Poincare group. Various representations of wave and field functions are given.