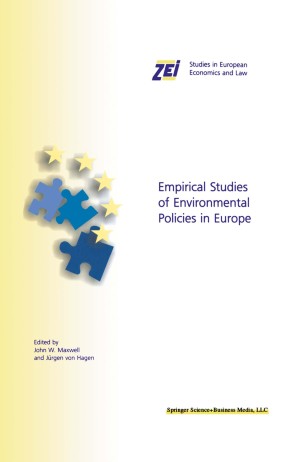 John W. Maxwell and Jiirgen von Hagen Kelley School of Business, Indiana University; ZEI, University of Bonn, Indiana University, and CEPR Prior to the 1970's, economic studies of the natural environment were chiefly concerned with the optimal extraction of natural resources such as oil, coal, and timber. This focus reflected the commonly held belief that the natural environmental was sufficient to sustain the world's population in relative comfort (at least in developed nations) and was "there for the taking". By the late 1960's, however, the spectacular levels of economic growth that had taken place since the Second World War began to exact a visible toll on the natural environment. This visibility prompted growing concern for the environment among activists, government officials, academics and the pUblic. This concern has followed a general upward, though cyclic, trend to the present day. Remarkable events during this trend include the issuing of the Brundtland report, and the world environmental summits help in Rio and Kyoto. Concern for the natural environment has impacted the discipline of economics, resulting in the birth of the field of environmental economics that has recently eclipsed in popularity its parent field of natural resource economics.