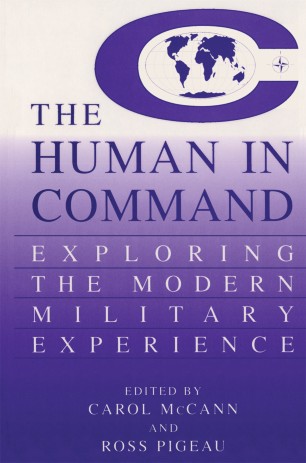 The Human in Command

MAJOR-GENERAL M. K. JEFFERY Command, and mdeed the human in command, has always been key to milItary operations. The complexIty and tempo of modern operations make this statement even more true today than in the past. However, both the military and the research 2 communities have tended to treat command and control (C ) from a limited per­ spective. For too long, command and control have been considered as if they were a single concept, with control often dominatmg our study. Indeed, in many 2 cases we have divorced operational C from the military institution itself, resulting in disconnects and inefficiencies. Then, in an attempt to overcome these self-inflicted deficiencies, we have pursued the Holy Grail of technology, hoping that it 2 would solve our C problems. Only now, as we start to realize technology's costs 2 and limitations, are we looking critically at C • This book attempts to take such a look. The contributions that make up this book are the product of a June 1998 NATO (North Atlantic Treaty Organization) workshop called The Human m Command. Far from being purely an academIc exercise, this gathenng brought together milI­ 2 tary leaders and civilian scientists to discuss C's central pragmatic and conceptual issues-its assumptions, its practices, and its organization. Indeed, in recent years there has been mounting evidence that both our society and Its military institutions are facing organizational crises.