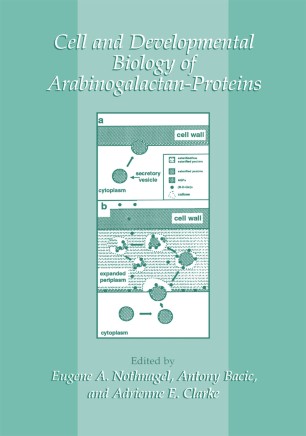 Cell and Developmental Biology of Arabinogalactan-Proteins

Arabinogalactan-proteins are distributed throughout the plant kingdom and are present in leaves, stems, roots, floral parts, and seeds. At the subcellular level, AGPs are localized on the plasma membrane, in the cell wall, in secretory and endocytotic pathway organelles, in stylar and root secretions and in the medium of cultured cells. The widespread distribution of AGPs indicates that they perform important functions. An expansion of knowledge regarding AGPs has been initiated and sustained through new experimental approaches, including the development of monoclonal antibody probes and cloning of cDNAs corresponding to core polypeptides. Regulated expression and other evidence points to the involvement of AGPs in plant reproductive development, pattern formation, and somatic embryogenesis, as well as in the processes of cell division, cell expansion, and cell death. AGPs also have an importance to industry. One example is gum arabic, an exudate from Acacia senegal, a mixture of AGPs and polysaccharides which has unique viscosity and emulsifying properties that have led to many uses in the food as well as other industries.