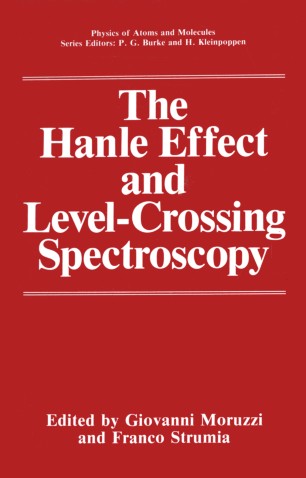 The Hanle Effect and Level-Crossing Spectroscopy

I am most pleased and, in a way, I feel honored to write the Foreword for the book The Hanle Effect and Level-Crossing Spectroscopy, which covers such a very wide range of applications not only in the initial areas of atomic and molecular physics, but also in solid state physics, solar physics, laser physics, and gravitational metrology. To link these fields together in a coherent way has been the merit of the editors of the book, who attracted most distinguished authors for writing the chapters. In retrospect to Hanle's discovery of quantum mechanical coherence between two quantum states about 65 years ago, this book demonstrates the enormous impact and central importance the effect has had, and most vividly still has, on modern physics. On the other hand, the concept of quantum mechanical coherence, which is an outgrowth of the linear super­ position principle of quantum states, has been evident through a consider­ able number of experimental methods beyond the original Hanle effect; some of these methods were only recently discovered or applied and they have indeed revolutionized research fields such as atomic collision physics.