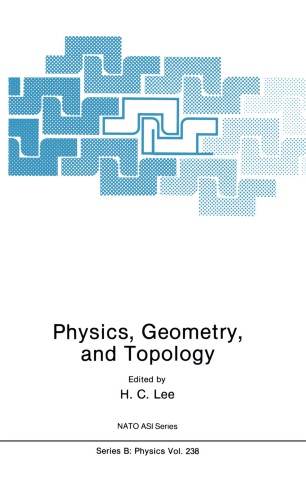 The Banff NATO Summer School was held August 14-25, 1989 at the Banff Cen­ tre, Banff, Albert, Canada. It was a combination of two venues: a summer school in the annual series of Summer School in Theoretical Physics spon­ sored by the Theoretical Physics Division, Canadian Association of Physi­ cists, and a NATO Advanced Study Institute. The Organizing Committee for the present school was composed of G. Kunstatter (University of Winnipeg), H.C. Lee (Chalk River Laboratories and University of Western Ontario), R. Kobes (University of Winnipeg), D.l. Toms (University of Newcastle Upon Tyne) and Y.S. Wu (University of Utah). Thanks to the group of lecturers (see Contents) and the timeliness of the courses given, the school, entitled PHYSICS, GEOMETRY AND TOPOLOGY, was popular from the very outset. The number of applications outstripped the 90 places of accommodation reserved at the Banff Centre soon after the school was announced. As the eventual total number of participants was increased to 170, it was still necessary to tum away many deserving applicants. In accordance with the spirit of the school, the geometrical and topologi­ cal properties in each of the wide ranging topics covered by the lectures were emphasized. A recurring theme in a number of the lectures is the Yang-Baxter relation which characterizes a very large class of integrable systems including: many state models, two-dimensional conformal field theory, quantum field theory and quantum gravity in 2 + I dimensions.