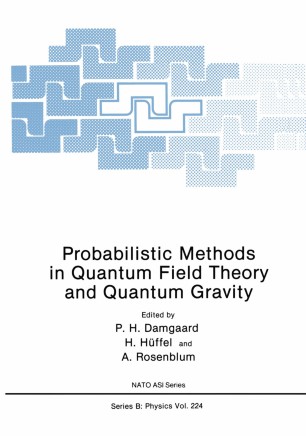 From August 21 through August 27, 1989 the Nato Advanced Research Workshop Probabilistic Methods in Quantum Field Theory and Quantum Gravity" was held at l'Institut d'Etudes Scientifiques, Cargese, France. This publication is the Proceedings of this workshop. The purpose of the workshop was to bring together a group of scientists who have been at the forefront of the development of probabilistic methods in Quantum Field Theory and Quantum Gravity. The original thought was to put emphasis on the introduction of stochastic processes in the understanding of Euclidean Quantum Field Theory, with also some discussion of recent progress in the field of stochastic numerical methods. During the final preparation of the meeting we broadened the scope to include all those Euclidean Quantum Field Theory descriptions that make direct reference to concepts from probability theory and statistical mechanics. Several of the main contributions centered around a more rigorous discussion of stochastic processes for the formulation of Euclidean Quantum Field Theory. These rather stringent mathematical approaches were contrasted with the more heuristic stochastic quantization scheme developed in 1981 by Parisi and Wu: Stochastic quan­ tization, its intrinsic BRST -structure and stochastic regularization appeared in many disguises and in connection with several different problems throughout the workshop.