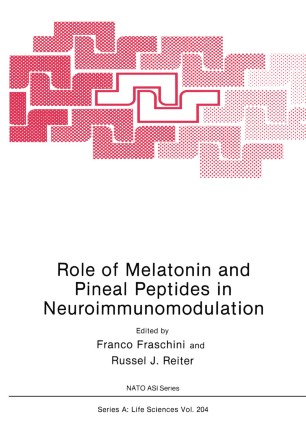 Role of Melatonin and Pineal Peptides in Neuroimmunomodulation

Research related to the pineal gland has advanced rapidly in the last three decades since the discovery of its most important hormone, melatonin. This indoleamine has been shown to have a large variety of effects in the organism; the bulk of these actions were initially thought to relate the pineal gland to the reproductive and endocrine systems. It is now apparent, however, that the physiologic interactions of the pineal and its hormones far transcend its control of endocrine function. One field of pineal research that has developed rapidly within the last 5 years has been the demonstration of its relationship to the immune system. Since the pineal gland is part of the central nervous system, these observations generally fall in the category of neuroimmunology, an area that, in its own right, has received a great deal of attention in the last decade. Thus, a NATO Advanced Study Course entitled "Role of Melatonin and Pineal Pep tides in Neuroimmunomodulation" was convened in Erice, Sicily, on June 3-9, 1990. This book is a result of the scientific presentations given at the workshop. The contributions to the book include mini-review articles which summarized the presentations of the invited speakers as well as a selected number of brief communications where the subject matter was in line with the theme of the Advanced Study Course.