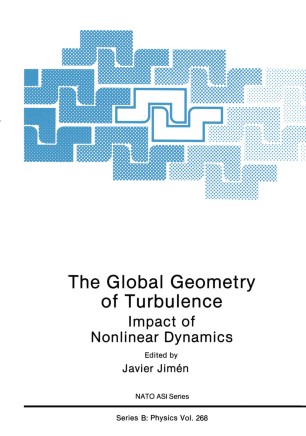 The Global Geometry of Turbulence

The aim of this Advanced Research Workshop was to bring together Physicists, Applied Mathematicians and Fluid Dynamicists, including very specially experimentalists, to review the available knowledge on the global structural aspects of turbulent flows, with an especial emphasis on open systems, and to try to reach a consensus on their possible relationship to recent advances in the understanding of the behaviour of low dimensional dynamical systems and amplitude equations. A lot has been learned during recent years on the non-equilibrium behaviour of low dimen­ sional dynamical systems, including some fluid flows (Rayleigh-Benard, Taylor-Couette, etc. ). These are mostly closed flows and many of the global structural features of the low dimensional systems have been observed in them, including chaotic behaviour, period doubling, intermit­ tency, etc. . It has also been shown that some of these flows are intrinsically low dimensional, which accounts for much of the observed similarities. Open flows seem to be different, and experimental observations point to an intrinsic high dimensionality. However, some of the tran­ sitional features of the low dimensional systems have been observed in them, specially in the intermittent behaviour of subcritical flows (pipes, channels, boundary layers with suction, etc. ), and in the large scale geometry of coherent structures of free shear flows (mixing layers, jets and wakes).