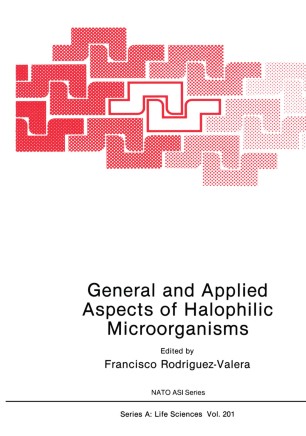 During recent years the subject of extreme environments and extremophiles has become a central topic in modern Biology. The capability of some microorganisms to withstand, and often prefer, the harsh conditions found in such environments is helping to define the physicho-chemicallimits of life and in consequence its essential nature. Halophiles are one of the most representative types of extremophiles, requiring high concentrations of inorganic salts, mostly sodium chloride, to grow and survive. They inhabit hypersaline environments, the distribution and abundance of which dur ing geological eras are attested by the vast amounts of evaporite rocks present in the Earth crust and by their role in the generation of petroleum deposits. The corditions of high osmolarity and ionic strength that are concomitant with concentrated salt solutions challenge the stability of lipid bilayers and the structure of proteins forcing halophilic microbes to develop specialized molecules and physiological me;;hanisms to cope with this environmental stress. Even so, halophilism is a widespread trait in the microbial world. All the major groups of eucaryotic microbes, two groups of archaeobacteria and most phylogenetic branches of eubacteria have halophilic representatives. Therefore, the study of halophilic microorganisms is indeed a highly heterogeneous and extense topic. The present volume contains the contributions to the FEMS-NATO Advanced Research Workshop on "General and Applied Aspects of Halophilic Microorganisms" held at Alicante, Spain, September 17-22, 1989.