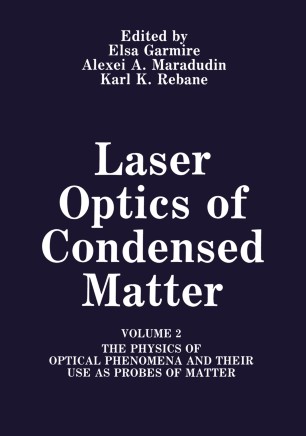 The Fourth USA-USSR Symposium. on The Physics of Optical Phenomena and Their Use as Probes of Matter, was held in Irvine, California, January 23-27, 1990. Participating in the Symposium were 22 scientists from the USSR and 29 from the USA. In addition, to provide an international dimension to this Symposium without, however, compromising significantly its essentially binational character, 7 non-US and non-USSR scientists were invited to take part in it. The present volume is the proceedings of that Symposium, and contains all manuscripts received prior to August 1, 1990, representing. scientific contributions presented. A few manuscripts were not received, but for completeness the corresponding abstract is printed.. Three previous USA/USSR Binational Symposia on related topics have been held, viz. "Theory of Light Scattering in Condensed Matter" (Moscow, 1975), "Light Scattering in Solids" (New York, 1979), and "Laser Optics of Condensed Matter" (Leningrad, 1987). These meetings were evaluated by the participants as highly successful and provided invaluable oppor­ tunities for researchers to exchange information and to initiate colla­ borative work which led to research visits by US physicist to Soviet laboratories, and vice versa, and which continue to the present day.