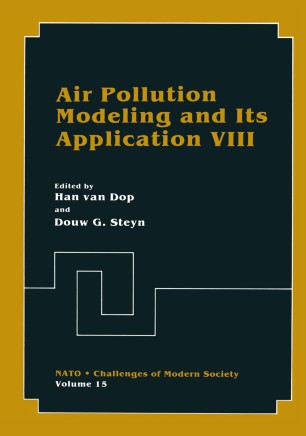 In 1949, when the North Atlantic Treaty was ratified, one of its articles explicitly noted '1hat member countries should contribute towards the further development of peaceful and friendly international relations." Specific problems related to the human environment were addressed by the Committee of Challenges of Modern Society (CCMS) of NATO, established in 1969. This provided a framework within which a series of International Technical Meetings (ITMs) on Air Pollution Modelling has been held. This volume documents the proceedings of the 18th meeting in this series. Science, like the arts and sports, provides an ideal vehicle for "developing peaceful and friendly international relations". National boundaries have never been barriers to the movement of air pollution, and fortunately this has also proved true of scientists studying the transport of air pollution. It is thus satisfying to record that since the mid-seventies it has been commonplace to find Eastern European scientists among attendees at the ITMs which have (in a very modest way) participated in a precursor to the process which has led to historical changes in Europe and which will undoubtedly lead to a tremendous increase in personal and intellectual exchange on a worldwide basis.