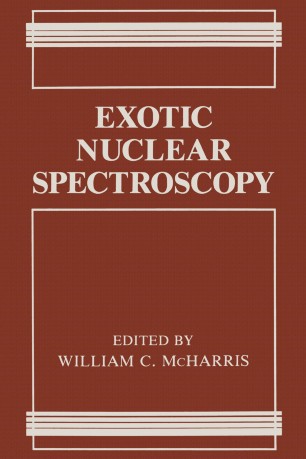 Several hundred nuclear scientists from more than a dozen countries met in Miami Beach, Florida, in September 1989 for a Symposium on Exotic Nuclear Spectroscopy, sponsored by the Division of Nuclear Chemistry and Technology of the Amencan Chemical Society. Braving five days of beckoning beaches, they presented, listened to, and discussed a series spectroscopy-both experimental and of invited papers covering the renaissance of nuclear theoretical-that has occurred during the past decade and which promises to continue well into the decade to come. This book contains the Proceedings of that Symposium on Exotic Nuclear Spectroscopy. But it is much more: During the ensuing six months, most of the pa{>ers were rewritten, polished, and/or expanded; so the resulting book is a much more fimshed, comprehensive, and up-to-date product than a general proceedings. Chapter se~uences follow the original symposium program, which, with a few exceptions, juxtaposes like topics. Each chapter can stand more or less on its own-although, as in any complex, interrelated scientific field, there are many cross-references among chapters. The manuscripts were edited and then uniformly typed in the Department of Chemistry at Michigan State University. I tried to keep the editing to a minimum so as to preserve the flavor of individual styles. A great debt of gratitude goes to those who helped make this volume possible, especially to Vada O'Donnell, who bore the largest burden of typing (and clarifying) the manuscripts.