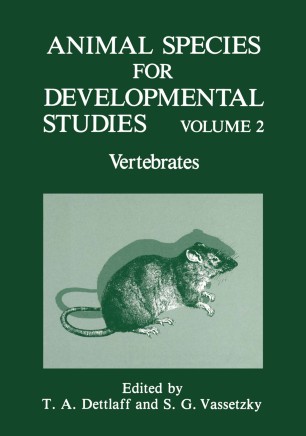 This volume is a revised and augmented edition of part of the book Ob"ekty Biologii Razvitiya (Animal Species for Developmental Studies) published in Rus­ sian in 1975 in the series of monographs Problemy Biologii Razvitiya (Problems of Developmental Biology) by Nauka Publishers, Moscow. That book described the development of organisms most frequently used in developmental biology studies. Data were provided for 22 animal species, belonging to different taxa, from protists to mammals. For the English edition we decided to divide the original book into two parts dealing with vertebrates and invertebrates, respectively. This volume deals with vertebrate species. When choosing these species, their advantages for laboratory studies, infonnation available, and availability for experimentation in the USSR and in Europe were taken into account. This geographical criterion explains the absence in the book of a number of species widely used in the laboratories of the USA, Japan, and other countries, such as Rana pipiens, Cynops pyrrhogaster, and others. Besides the classical laboratory animals, some fish have been described since the study of the mechanisms of their development and attempts to control their on­ togenesis are of immediate value and the results obtained can be tested on the mass material. A study of the development of laboratory mammals is of special interest since current problems of modern medicine and veterinary sciences are tackled using these animals.