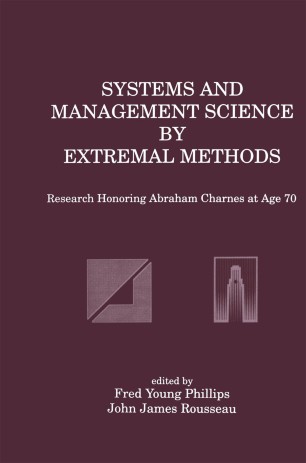 This volume, Systems and Management Science by Extremal Methods, is the second in a series dedicated to honoring and extending the work of Abraham Charnes. The first volume, entitled Extremal Methods and Systems Analysis (Springer Verlag, Berlin, 1980), was edited by A.V. Fiacco and K.O. Kortanek. Subtitled "An International Symposium on the Occasion of Abraham Charnes' Sixtieth Birthday," this first volume consisted of a selection from papers presented at a conference in honor of Professor Charnes held at The University of Texas at Austin in September 1977. This second volume consists of papers, to be described more fully below, that were presented in a similar 2 conference held at the IC Institute of The University of Texas at Austin, Texas, in October of 1987, to honor Dr. Charnes on his seventieth birthday. All these papers were written by scholars and scientists whose own work has been affected by the contributions of this distinguished scholar and educator over a long period of time.

'The book is certainly recommended to libraries of universities and research institutions...' Opsearch March 1993