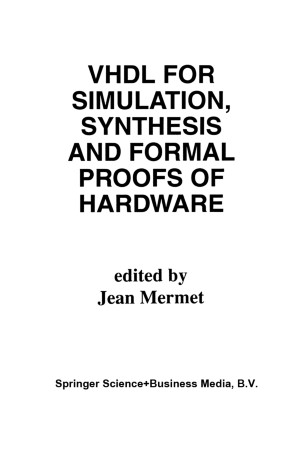 VHDL for Simulation, Synthesis and Formal Proofs of Hardware

Part of the The Kluwer International Series in Engineering and Computer Science book series (SECS, volume 183)

The success of VHDL since it has been balloted in 1987 as an IEEE standard may look incomprehensible to the large population of hardware designers, who had never heared of Hardware Description Languages before (for at least 90% of them), as well as to the few hundreds of specialists who had been working on these languages for a long time (25 years for some of them). Until 1988, only a very small subset of designers, in a few large companies, were used to describe their designs using a proprietary HDL, or sometimes a HDL inherited from a University when some software environment happened to be developped around it, allowing usability by third parties. A number of benefits were definitely recognized to this practice, such as functional verification of a specification through simulation, first performance evaluation of a tentative design, and sometimes automatic microprogram generation or even automatic high level synthesis. As there was apparently no market for HDL's, the ECAD vendors did not care about them, start-up companies were seldom able to survive in this area, and large users of proprietary tools were spending more and more people and money just to maintain their internal system.