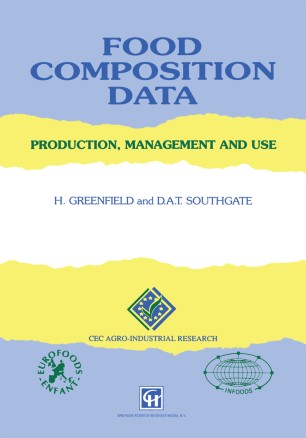 Production, Management and Use

About twenty years ago, there was a recognition in Europe that real benefits would flow from coordinating the manner in which food composition tables were produced in the various countries of Europe. Subsequent development of computerised nutritional data bases has further highlighted the potential advantages of working together. Such cooperation could lead to improved quality and compatibility of the various European nutrient data bases and the values within them. This realisation was one of the driving forces behind the development of the Eurofoods initiative in the 1980's when those people in Europe interested in data on food composition began working together. This initiative received further impetus with the establishment of the Eurofoods-Enfant Concerted Action Project within the framework of the FLAIR (Food-Linked Agro-Industrial Research) Programme of the Commission of the European Communities. It was quickly recognised that the draft guidelines for the production, management and use of food composition data which had been prepared under the aegis of INFOODS (International Network of Food Data Systems, a project of the United Nations University), would be especially applicable to the objectives of the Concerted Action. The guidelines have been written by two recognised experts. Many people associated with FLAIR Eurofoods-Enfant have added constructive criticism and advice to that offered previously by those associated with INFOODS. Thus the guidelines are backed by a consensus in the community of those responsible for the production and use of food composition tables and nutrient data bases.