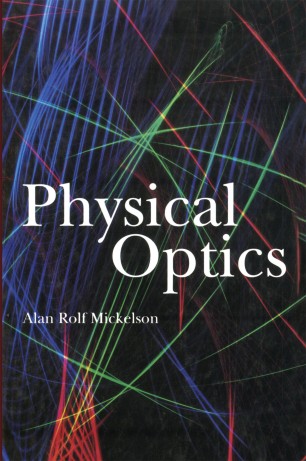 This present text has emerged from the lecture notes for a one semester, first year, graduate level course which has been offered yearly since fall 1985 here in the Electrical and Computer Engineering Department at the University of Colorado at Boulder. Enrollment in the course, however, has not been limited to first year graduate electrical engineering students, but has included seniors, as well as more advanced students, from a variety of disciplines including other areas of engineering and physics. Although other Physical Optics texts exist, the most up-to-date ones are written primarily for undergraduate courses. As is discussed in slightly more depth in the introduction in the beginning of Chap­ ter 1, up-to-dateness is important in a Physical Optics text, as even classical optics has been greatly rejuvenated by the events of the last 30 years, since the demonstration of the laser. The perception of this author is that the needs of a graduate level text are quite different from that of an undergraduate text. At the undergraduate level, one is generally pleased if the student can qualitatively grasp a portion of the concepts presented and have some recollection of where to look them up if need be later in his/her career. A deeper insight is necessary at the graduate level and is generally developed through qualitative analysis of the problems within the subject area.