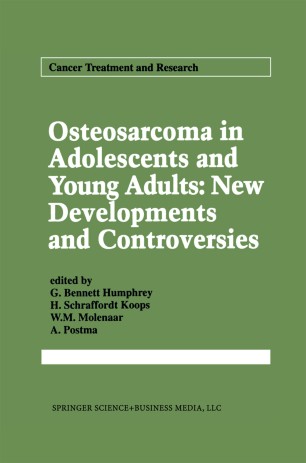 Osteosarcoma in Adolescents and Young Adults: New Developments and Controversies

Osteosarcoma in Adolescents and Young Adults: New Developments and Controversies is the fifth volume in the series `Cancer Treatment, and Research' devoted to pediatric oncology. Like its immediate predecessor, Hodgkin's Disease in Children: Controversies and Current Practice, this volume also deals with the current state of affairs: where do researchers differ in opinions or firmly held beliefs? What does the future hold for research or for the patients who have benefited from research and are now cured? etc.
The first part deals with preclinical and clinical issues that relate to the disease and the second part deals with the results of recent trials and in some cases ongoing trials. It could be argued that section B Pharmacology, Section D Radiotherapy and Section E Surgery of part one belong to part two; however in these sections we have tried to focus on one discipline and in part two, we have tried to focus on the results of multidisciplinary trials. A third part includes a few critiques and editorial comments.
This volume was prepared and planned for both basic and clinical oncologists. It is hoped that the basic scientists will gain some insight into the problems of their clinical colleagues and that the clinicians will be willing to read to the more basic articles. It is not a text for students (or for that matter physicians) who want all things to be laid out in `black and white'. But it is a text for those students who want to know how vibrant this field of research is and are willing to stand in awe of how much research needs to be done.