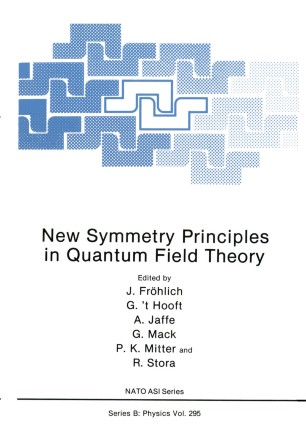 Soon after the discovery of quantum mechanics, group theoretical methods were used extensively in order to exploit rotational symmetry and classify atomic spectra. And until recently it was thought that symmetries in quantum mechanics should be groups. But it is not so. There are more general algebras, equipped with suitable structure, which admit a perfectly conventional interpretation as a symmetry of a quantum mechanical system. In any case, a "trivial representation" of the algebra is defined, and a tensor product of representations. But in contrast with groups, this tensor product needs to be neither commutative nor associative. Quantum groups are special cases, in which associativity is preserved. The exploitation of such "Quantum Symmetries" was a central theme at the Ad­ vanced Study Institute. Introductory lectures were presented to familiarize the participants with the al­ gebras which can appear as symmetries and with their properties. Some models of local field theories were discussed in detail which have some such symmetries, in par­ ticular conformal field theories and their perturbations. Lattice models provide many examples of quantum theories with quantum symmetries. They were also covered at the school. Finally, the symmetries which are the cause of the solubility of inte­ grable models are also quantum symmetries of this kind. Some such models and their nonlocal conserved currents were discussed.