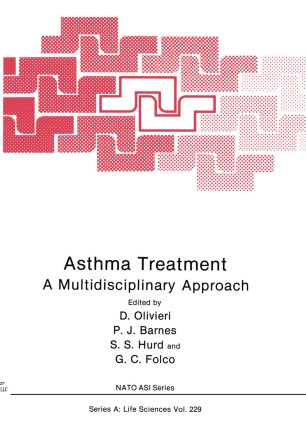 From the 19-29 May 1991 the NATO ASI Course PAsthma Treatment: A P Multidisciplinary Approach was held in Erice, on the rocky North West Coast of Sicily, facing the ancient Phoenician shore of the African Continent. Sixty NATO sponsored participants arriving from many different European Countries - Nato members and non - attended the course. Qualified researchers from Europe and the United States held extensive lectures, short meetings and small informal group discussions. Erice is a magical place which draws together people from different backgrounds and cultures under her Mediterrean charm, recreating the ancient Greek openair discussion atmosphere. And so, during the 10 days gathering, the extensive willingness of the senior investigators and the laudable enthusiasm of the younger participants was stimulated. All of the most recent findings in the biology and the pharmacology of Asthma were discussed, initially behind closed doors, to be unhurriedly continued along the alley ways of the "Cittadella della Scienza" , in Erice's small restaurants, and on her deserted beaches. The texts collected here are testimony to the high quality of the investigators contributions as well as their far reaching interests. I think that a Director of such a Course would be adequatly satisfied by merely considering the enthusiasm and high level involvement of every participant. He could not have been more satisfied after having considered the proceedings summerizing the scientific content of the meeting.