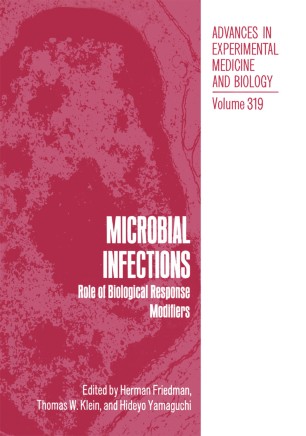 Part of the Advances in Experimental Medicine and Biology book series (AEMB, volume 319)

This volume is based on the Proceedings of the International Conference on "Microbial Infections: Role of Biological Response Modifiers" held in Tampa, FL, May 29-31, 1991. The major purpose of this conference was to bring together in one forum prominent investigators from around the world studying a variety of microbial pathogens, including bacteria, viruses, and fungi, and the effects of biological response modifiers (BRM) on the immune response to these microorganisms. BRM have been widely utilized in the area of antitumor resistance and include not only experimental tumor cell vaccines, but also biologically active substances such as cytokines, i. e. , interferons, tumor necrosis factor, and interleukins, as well as products from bacteria which influence host resistance mechanisms. It is the belief of the organizers of this Conference that it was very timely to discuss in detail BRMs as they impact on microbial infections per se. It is now widely accepted that immunocompromised individuals, including those exposed to immunosuppressive substances such as antimetabolites used for chemothera­ py of malignancies, or infectious agents, such as the human immunodeficiency virus and other viruses which depress the immune response and, in turn, affect a host so as to become highly susceptible to opportunistic microorganisms, benefit from BRM stimulation of their immune system. A wide variety of immunomodulators are now being studied in terms of treating infectious diseases, as well as malignancy and autoimmune diseases.